The Harney Family, campers since 1965

Since Wakeda Campground opened its acres of woods to guests in 1965, the Harney family has been spending at least part of their summer “camping in the pines.” During their most recent visit in 2017 and with four generations of Harneys gathered in the E section, the family shared some of their favorite memories.

They first found Wakeda thanks to a neighboring campground that was full for the evening and directed them down Route 88. “We never did end up camping there,” Sally recalls, laughing. “We woke up in the morning [at Wakeda] and thought, ‘How beautiful!’” While they started off in one 9’ x 18’ tent, they soon “graduated” to a small pop-up camper. Three days after school ended, Sally and Joe packed up the children and drove to Hampton Falls to settle in for the summer. Sally stayed with the kids and Joe would join the family on the weekends, driving up after work on Friday and returning (reluctantly) to Walpole on Sunday evenings. Sally recalled learning to drive the family Volkswagen Beetle at Wakeda - a necessity, since a main attraction was Wakeda’s proximity to the beaches. On other days, after the children ate breakfast, they would be gone for the day, on various adventures through the woods. Joe, Liam, and Margaret remember spending entire days at the playground, helping clean bathrooms, filling and delivering wheelbarrows full of wood from the woodpile that used to be across from the Little Building. They would stock up on 10 or 15 cents worth of penny candy in the office. Another favorite activity was trying to catch frogs in the ponds behind the office or near the Pavilion. Sally remembers taking the Beetle to pick the kids up for a trip to the beach, only to find them “knee-deep IN the stinky pond trying to capture the frogs.”

There were a few other minor mishaps that cause much delight in the retelling - the time that 8-year-old Liam, while walking the family German Shepard, tied the leash around his waist and wound up hugging a tree as the dog chased after an elusive squirrel. Another involved a visit from a city-dwelling friend: when Sally and her friend heard a noise one night after the children were in bed, neither was particularly anxious to investigate. In the morning, however, her friend’s son was missing. When the women went outside to investigate, they found the boy sleeping peacefully on a bed of pine needles. He had rolled right out of the bed, through the canvas of the pop-up, onto the ground, all without waking himself and without a scratch!

One year, Joe put his carpenter skills to use making a platform out of an old Ping-Pong table, which allowed Liam to practice his sport, Irish dancing. It certainly worked - not only did Liam attract crowds of campers to watch him, he went on to become a two-time world Irish dance champion! The Harneys also fondly remember their interactions with Charlie and “Mrs. Savage.” (“She was always ‘Mrs. Savage’,” Margaret remembers.) “Every time we came back, there were more and more sites,” Joe said. “Charlie was always down here with the tractor.” They would also see him riding through on his golf cart with the toolbox on the back, on his way to fix or tinker with something. “Whatever it was, he could make it work. That was the key,” said Joe. Charlie brought them corn, peppers, and other vegetables from the garden he tended behind the saw mill, and the children would join Mrs. Savage on her walks, picking up trash. 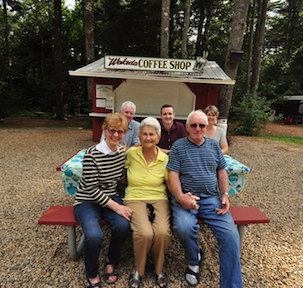 Over 52 years, as the Harney family has grown, they have continued to make Wakeda part of their summers and to share it with their grandchildren and great-grandchildren. Wakeda and the Savage family are delighted to have hosted the Harney family for so many years and to have been the setting for so many wonderful family memories. Many thanks to them for sharing their stories and we look forward to seeing them for many more years to come!